Alice is one of the main characters of Half Inch High; she's friends with many other characters, such as Bunny. She is 5' 4'' (165 cm) tall, and she is a senior at her high school. Her birthday is on May 31st. 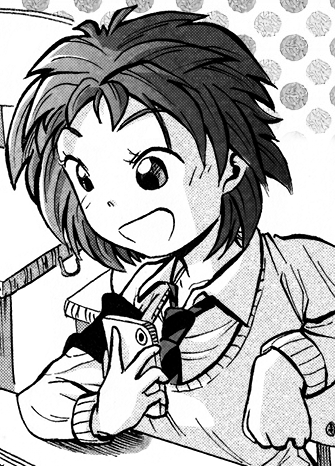 Alice rejoicing as she learns of the death of hundreds of micros.

Alice is a girl dislikes cheesy stuff and school as a whole, and who is known in the school for her way of teasing micros (no matter whether they're students like her or teachers), even though the sheer amount of cruelty she is capable of expressing through her actions is still unknown to most, as she keeps almost all her most terrible and unforgivable acts secret.

When micros are not involved, she is generally a very friendly and outspoken girl who enjoys talking, hanging out with her friends and chatting with them via messaging apps on her phone, therefore pretty much nobody suspects this girl actually kidnapped one of her classmates (her ex-boyfriend's new girlfriend) and killed her friend (A Cruel Ex-Girlfriend). Only Nana suspects that Alice is behind this incident and is investigating it, but she has not been able to come up with any concrete evidence yet. She is also notably and openly friends with two other girls who are bullies just like her, who are actually even crueler and colder toward micro people than she is.

Alice does not think of micros as people who have rights and a role in society, but rather she sees them as her personal toys to play with when she feels like it. She is aware of the consequences of her own actions though, which is why she has to keep all of her shenanigans secret—even to her friend Bunny, who would definitely never forgive her if she were to find out everything Alice has done since she entered the school. Her playful teases are usually centered around humiliating her target (The New Science Teacher) and they rarely involve death, unless she thinks the micro deserves it (Just A Plaything), or the circumstances require it.

The micro person she hates the most is definitely, as was said above, her ex-boyfriend's new girlfriend, that she kidnapped after breaking into a micro-only zone with the purpose of keeping her at home and torturing her everyday—but she also dislikes Mai because of her never-ending shouting about micros' rights that gets on her nerves everyday (The Micro Student Representative).

Because of her personality and actions, micros have started to fear her, and it is not unusual to see some of them running away or hiding behind table and chair legs whenever they see her approaching.

The strips in which Alice stars as the main character are boldened.