Tsumi is one of the secondary characters of Half Inch High, and one of Alice's bully friends. She is 5' 4'' (165 cm) tall, and she is a junior at her high school. Her birthday is on February 28th. 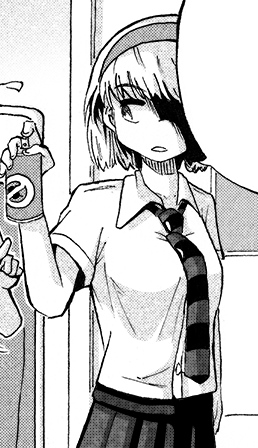 Getting ready to kill a cockroach with the bug spray she always carries with herself.

Despite being younger than Alice and most of the other girls, this blonde girl is a calculative type of sociopath who thinks of tiny people as nothing more than talking playthings that can easily be disposed of when needed, unworthy of even walking near her; she likes reading erotic stories and manga, and strongly dislikes insects and all sorts of bugs and small animals. Still, since she barely talks to anyone, most of the other normal-sized students are actually unaware of her real thoughts and generally consider to be extremely shy, although some are still weirded out by her scary glares or weird way of speaking.

The only people she really formed a connection with are her buddies Alice and the other, black-haired bully, who share the same passion for being naughty to smaller people. It is not true friendship though, as she seems incapable of even understanding what being someone's friend means, to the point she can act rude even toward her own bully mates when she feels like doing so, for example by ungraciously ordering them to shut up if they talk too much (Kill The Witnesses); apart from this, she follows the school regulations, behaves well and does not stand out too much—so that other students have no problem asking her for help when it comes to mundane tasks such as carrying a sick schoolmate to the infirmary (Cockroach!).

Micro students are also generally unaware of her true allegiance, but they still flee when they see her simply because she always hangs out with the other bullies. She has already killed many micro students for her personal pleasure (mostly by squashing them, or using the bug spray she is always carrying in her school bag), though she has always escaped punishment because of lack of evidence.

The strips in which Tsumi stars as the main character are boldened.