Bunny (real name: Usako) is one of the main characters of Half Inch High; she's friends with many other characters, such as Alice and Nana. She is 5' 5'' (168 cm) tall, and she is a senior at her high school. Her birthday is on May 8th. 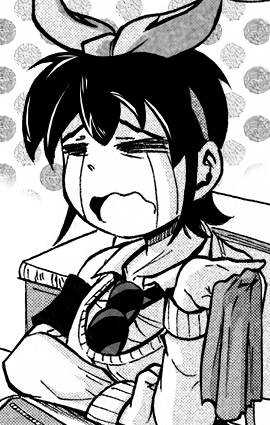 Bunny crying as she learns of the death of hundreds of micros.

Bunny is a regular high school girl who's generally liked by most of her schoolmates; she's known for her gentle and kind attitude (especially towards tiny people), and she was also one of the very few students to have a micro boyfriend before an unfortunate accident ended that relationship forever (My Tiny Boyfriend). She really likes wearing ribbons (which explains the "Bunny" nickname her friends gave her, and that she now uses to refer to herself, too) and adores cute stuff in general; she dislikes math, science and, of course, perverts.

Bunny thinks tiny people have a right to a peaceful life like everyone else, which made her pretty popular in the micro community; however she's also known for her absent-mindedness (which still makes her a pretty dangerous individual to stay close to when you are only half an inch tall), and some students have decided to stay away from her after they learned of the two deaths she is directly responsible of. Indeed, she is currently responsible for the deaths of two micro teens: apart from her small boyfriend, there is also a tiny boy that was accidentally killed between her breasts while she was at the beach together with her friends (The Beach Episode).

She is friends with Alice, but is, like pretty much everyone else, unaware that she is a kidnapper and a murderer. However she knows pretty well that Alice loves teasing tinies, and sometimes goes too far while doing so, in which case she's always ready to step in to defend those who are smaller than her (The New Science Teacher). She is also aware of Mai's campaign for tiny people's rights, which she agrees with despite not doing anything to support it directly.

Her real name is actually Usako, although she's been nicknamed "Bunny" bu her friends because of the ribbon she's always wearing on her head (My Friend Alice).

The strips in which Bunny stars as the main character are boldened.