Nana is one of the main characters of Half Inch High; she's friends with many other characters, such as Bunny and Mai. She also has a little (micro-sized) sister named Saya. She is 5' 6'' (170 cm) tall, and she is a senior at her high school. Her birthday is on October 21st. 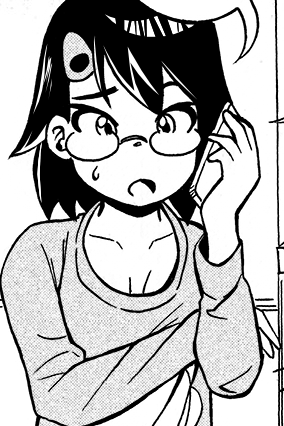 Nana worrying over her sister's behaviour.

Nana is an introvert girl who is among the smartest in her school, who likes reading all kinds of books and writing novels, and dislikes loud people and short skirts. She does have a good number of friends, but she hardly speaks to anyone else, and definitely not to the boys unless they are micros. Nana is really into detective novels and comics, and has thus started investigating on any accident involving micros that occur at school purely for the fun of it; this has lead her to suspect Alice is behind many of these incidents, though she has no evidence against her yet.

Still, despite being friends with some micro students and recognizing them as actual people, her interest in them is in great part a scientific one, and she's mostly drawn to them because of the weirdness of their condition—not to mention they are the only people she has no reason to be shy around or hide her studious personality from, because she knows very well they could not possibly bully her for that even if they wanted to; however, being friends with a few of them has not prevented her from accidentally killing some, like the ones she accidentally stepped on during class once (Detective Girl). She is also the one who killed a micro boy at the beach by squishing him between Bunny's breasts (The Beach Episode)

Micro people at school do not mind being around her, although some might prefer not getting too close to avoid accidents. Lastly, one tiny person she is especially close to is Saya, her own beloved little sister who happens to be micro-sized: since the two have been living together for years, Nana is now an expert when it comes to micro people safety (at least in theory), and she is especially over-protective toward her, to the point of deciding to homeschool her after she graduated from middle school to prevent her from going to her high school the following year.

The strips in which Nana stars as the main character are boldened.