Saya is one of the main characters of Half Inch High; she's Nana's little sister, who has graduated from middle school during the course of the comic and is currently being homeschooled by her sister. Being a young kid, she is only 0.33' (8 mm) tall. Her birthday is on February 4th. 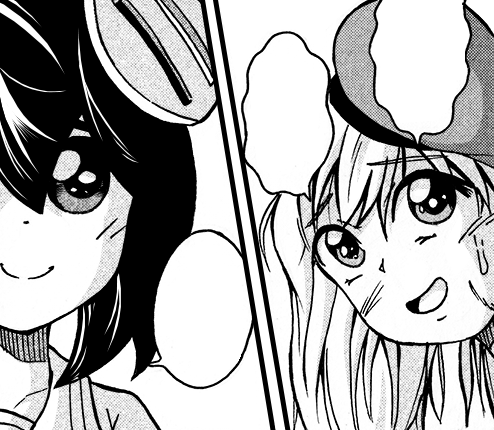 Saya and her friend Momoko.

Saya is a cheery and happy little girl who has been living her whole life in a safe environment both at home and at school (safely placed in the small, tiny-only district of the town): for this reason, she is very curious about the world and all the places she has never been allowed to visit because it would be too dangerous for her. For this very reason, she once tried to enter her sister's school by hiding inside a pocket of her skirt, but she ended up getting almost killed by one of the school bullies, thus witnessing with her own eyes some of the most cruel aspects of the outside world (Saya's Little Adventure); she was later again protagonist of a terrible incident when a cosplayer entered the micro-only zone where her middle school is in order to take some photos, which then led to the death of her best friend, Momoko, who ended up being accidentally crushed by a policewoman in front of her own eyes (The Art Of Cosplay).

She has never really had any contact with the normal-sized folks apart from the bigger members of her own family, who have of course always been incredibly caring and excessively overly-protective toward her; but after she risked dying at the hands of a cruel girl at her sister's high school, she began to understand that not everyone is as kind as her sister, and started being much more suspicious (and scared) of anyone normal-sized.

The strips in which Saya stars as the main character are boldened.