This girl's name has not been revealed yet in the comic, but she is one of the main characters of Half Inch High. She is a first-year student, and also Alice's ex-boyfriend's new girlfriend. She is 0.35' (9 mm) tall, and her birthday is on June 1st. 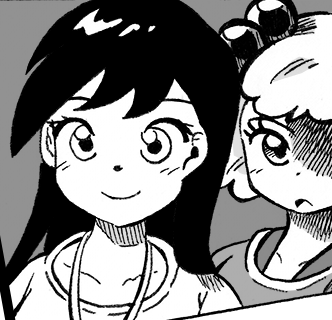 Nana's flashback about the victims of the kidnapping-murder incident.

Not much is yet known about her: she became Alice's ex-boyfriend's fiancée some time after he left her, and Alice has never forgiven her for this. After breaking into a tiny-only zone and finding her with a friend at a bus stop, Alice kidnapped her and killed her friend by feeding her to some cats to prevent her from contacting the police (A Cruel Ex-Girlfriend); her current whereabouts are unknown to everyone but Alice—even if Nana actually heavily suspects she is with Alice now (Detective Girl). Recently, Alice revealed to her bully friends (the black-haired one and the short-haired one) that she was the one behind the kidnapping, and proposed them to torture her together; but the presence of witnesses and the sudden arrival of a teacher caused the torture to be postponed to another date (Kill The Witnesses).

Being a quiet girl, she doesn't stand out too much; so most of the normal-sized students will not even know who she is (except her classmates). She then became the talk of the school after her disappearance, which is still an unsolved mystery. As for other micros, she used to have an equally tiny friend she spent most of her time with—but she was killed by Alice.

The strips in which (Unnamed) stars as the main character are boldened.